I remember some years ago while preparing to preach a sermon on Philemon, reading Matthew Henry’s classic commentary (written in the eary 18th century) with increasing surprise. Henry (or those who finished his commentary after his death) waxed lyrical about Paul’s appeal to Philemon, and about the gift of freedom in Christ; but didn’t say anything about the fundamental injustice of slavery which is at the root of this letter and the issues it addresses.

It was a powerful reminder that people have often been blinded to what seems obvious to us, by the simple fault of having been born too soon! In 1708, slavery was so much a part of society that it didn’t occur to most Christians that it was endable, let alone a great injustice. Likewise in Paul’s day, slavery was a foundation of Roman society, and it doesn’t seem to have occurred to Paul or other Christian leaders to campaign to do away with it.

Instead Paul appeals on behalf of one slave to the master from whom he has run away. Paul appeals to Philemon to forgive Onesimus and send him back to Paul as a free partner in the work of the gospel. But first there must be the risk (to Onesimus) of going back to face possible punishment as a runaway and the cost (to Philemon) not only of giving away his property but of forgiving the wrong he has been seen to suffer.

In Paul’s appeal to Philemon to see Onesimus ‘no longer as a slave but more than a slave, a beloved brother’ (Phm.16) is the seed of the end of slavery. A few decades after Matthew Henry wrote his commentary, Josiah Wedgwood produced his famous medallion to promote the abolition of slavery, taking this image and using it powerfully. 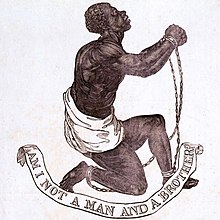 It only took about 1800 years, but eventually the message got through. One brother does not own another.

I don’t know whether or not Paul saw the logic of his own conviction. I have no idea whether or not he dreamed that one day all slaves should be free. I do think that if he had campaigned for the end of slavery, then the Church would have been persecuted far more than it was, and perhaps more than it could survive.

But whether or not Paul expected and prayed for the end of slavery, he left Philemon with a call that echoes down the centuries, and perhaps might help us to begin to see some of our own blind spots – unless of course we’re the first to be living with a clear vision of everything God wants from us, unlike those benighted souls of former years!

Paul left Philemon with the challenge to do the right thing even in a compromised system. He didn’t call Philemon to work to overthrow the Roman state system. He called him to treat a slave as his brother, and to forgive him.

Regardless of my position on any of the disputes of the day, that call still stands – whoever stands before me is my brother or sister. Not property, not a representative of some abstract ‘them’ but a person like me. Loved by God, to be loved by me.

Of course, often we manage to fit that call into our blind spot as well.